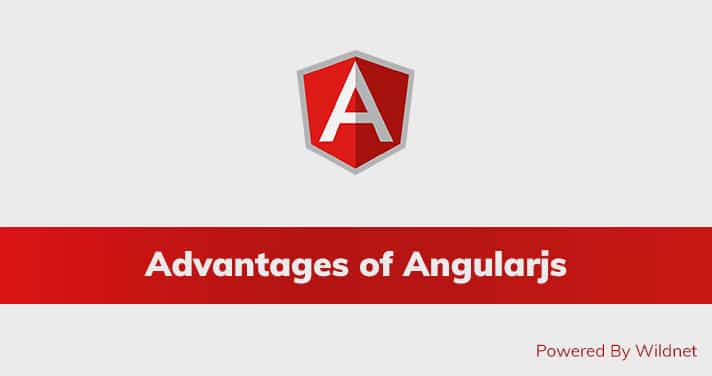 AngularJS is a structural framework for web application development. It is Google’s maintained open-source JavaScript-based front-end web framework. Its goal is to augment browser-based applications with Model–View–Whatever (MVW) capability and reduce the amount of JavaScript needed to make web applications functional.

AngularJS is a full-featured framework for writing Single Page Applications (SPA) and mobile apps. AngularJS designers can use HTML as the template language. It also allows for the extension of HTML’s syntax to convey the application’s components effortlessly.

When it comes to the list of AngularJS advantages or offerings we have a nice number of applications and websites that are made with Angular JS as their foundation.

For example, PayPal, the online money transfer legend is currently operational in nearly 200 countries across the globe.  It has been 2 decades since it was founded and to this date, the framework has managed to collect 254 million users in 200 nations.

Then there is Gmail – well, everybody knows what it is. And for those who don’t know what it is – Gmail is a free emailing platform that has been developed by Google. Not only this, the platform is highly useful, efficient, and remarkably intuitive.

It is these characteristic features that Gmail is operated by more than 1.4 bn people worldwide. For Gmail like web app Angular JS is just the icing on the cake. Other websites using Angular JS are the Guardian, MallZee, Posse, MobileRoadie, IBM, Freelancer, GoodFilms, JetBlue, and many many more.

As the latest stats reveal Angular JS is one of the most sought after frontend development frameworks in the United States.  Much of the credit is often given to its capabilities that have redefined the way websites play a role in businesses to make huge profits.

Following are Features and Advantages of AngularJS –

1. Code less, reuse – Angular frees its developers from the hassle of writing lengthy codes. As Angularjs is the derivative of HTML, professionals may choose not to emphasize on writing the code. However, the time to develop brand new web applications is interestingly less time which makes the development part comparatively easier and quicker.

Hopping on board with Angular has never been easier. All a professional requires to do is add certain attributes to the HTML code to create a simple app in no time. True, you may always reuse the code that has been used by you earlier. Code reuse in Angular is one of the most prominent features of the framework.

2. Efficiency at its best – when there is less amount of code you will need, there is always more time and efforts you can invest in increasing the efficiency of the product under question.

3. AngularJS features a simple architecture – The open source framework is known for its simple architecture that makes it quite easy for development professionals to get hold of. It provides the capability to create a Single Page Application in a very clean and maintainable way.

4. Better Plug & Play Components – AngularJS creates a component based architecture. With AngularJS you would split the components and the framework would take care of the rest. It serves as the pipeline that connects these components.

It showcases features which clients nowadays usually raise the demand for. The most notable part of Angularjs is that it can withstand huge web app management having 60 or more components and complex needs.

5. Easy to Customize – Design Architecture to get things going without interruption – Spot on! With AngularJS being used as the front-end development framework, it is much easier to manage projects even if you want to switch your dedicated resource in the middle of an unfinished project. The simplicity of architecture allows for hassle-free location of code and its development.

6. Two-way binding of data – AngularJS provides data binding capability to HTML. It is one of the most efficient frameworks we know today. The developer can transfers data from Model to View and View to Model.

DOM and Model synchronization is exceptionally efficient which allows the easy process of creating web applications.

7. MVW Design pattern – MVC is the main pattern for developing server-side code for web apps. AngularJS is primarily MVC framework, as it brings views and controllers out of the box and hence a long time. AngularJS also supports Model-View-View Model MVVM pattern which is relatively new, and it is evolving with applications for mobile devices and has moved to SPA also.

The AngularJS is designed to be used as MVW framework (Model – View – Whatever) architecture pattern. It gives freedom to a developer to decide what pattern to use.

8. Enhanced server performance – Angular actively supports caching. It also supports many other processes and hence results in reduced pressure on server CPUs. It uses the concept of lazy load, which is why it loads the requested component only, instead of loading the whole page, hence significant extent of traffic cuts down which decreases the page load time and raise the server performance.

This enhanced performance of the server ensures that CPUs respond to APIs and process static files quickly.

9. Easy to test – Testing was never more convenient but, with the AngularJS framework, the process of testing is exceptionally easy and flexible. AngularJS code is unit testable.

10. Developers have the much-needed control – There are directories in AngularJS framework that allow developers to have more control over HTML as well as certain other attributes that help them to create dynamic web pages which is another notable benefit of Angularjs for front end developers.

If you are planning to build a new web app, you might start off with Angular built on Typescript [Angular 2+]. However, with thousands of AngularJS [Angular 1.X] apps still in production, AngularJS isn’t going anywhere. In fact, AngularJS always sees continued development and support from the team.

AngularJS is a suite of capabilities and Angularjs developers are doing quite well to make the most out of these incredible features of the framework. Wildnet Technologies has a fleet of top Angular developers working relentlessly with an aim to offer bespoke product development services.

Leveraging agile, scalable and various other must-have aspects of Angularjs, Wildnet has managed to successfully deploy a nice figure of dynamic web apps in its years of unparalleled development services.

The organization has exploited a comprehensive set of benefits of Angularjs and contributed to making it even more popular and the most sought after technology ever.

Do you have an idea that could change the face of your business for good? Let us help you.

Some other Interesting Blogs :

–> How to choose the right technology stack for your Web App?