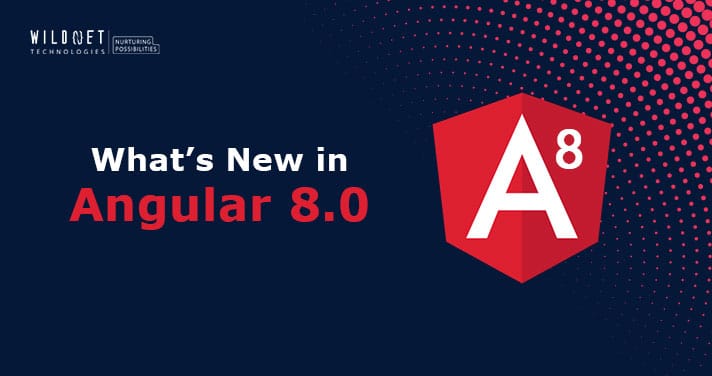 When the first version of Angular was introduced back in 2009, nobody had anticipated it would earn incredible popularity like it is with Angular 8.

Since that unstable release and to be able to become what it takes to stand out of the rest, Google has worked tremendously on Angular.

Introducing features such as lazy loading, ngupgrade, and web workers (all available in its latest version) to adding new libraries such as Prime NG, NGX Bootstrap, OnsenUI etc. have made Google’s popular framework in-demand more than ever.

Every release of this frontend JavaScript framework Angular renders it more stable than it is in its previous version. Able to handle all challenges proactively, the new version of the platform demands all its users to embrace the change of acquiring the new features and removing the obsolete ones.

Angular has been evolving since its first release almost a decade ago. And the very “cutting-edge application development platform” is improving itself time and again to further strengthen the entire web ecosystem and meet customer expectations.

The new Angular 8 is here!!

The new Angular V8 is nowhere with an impressive list of changes and improvements including the much-anticipated Ivy compiler as an opt-in feature!

Angular in its latest release Angular 8 has now become faster, simpler, and smaller. Building web and mobile applications will be a new experience altogether.

Angular 8.0 now supports TypeScript 3.4, and even requires it, so you’ll need to upgrade.

2. It is Ivy, the major change we’re talking about –  TL;DR: Ivy is the new compiler/runtime of Angular. Angular 8 Ivy uses incremental DOM where it takes a set of instructions (by creating DOM trees) to compile every single component.

Angular 8.0 is the first release to officially enable developers a switch to opt-in into Ivy.

Tree shakable – To speed up the results and load times, tree shakable removes only the unused instructions (and never to be used). When a component does not reference an instruction that has been unused, it is selected for the omission.

Low Memory Footprint – Memory allocation takes place only when the new nodes are added or omitted.

3. Lazy Loading – The feature is based on Angular Routing and it reduces the file size by lazy loading only the required files. The editor will also have the capability to spot any mistake in the syntax to be corrected by the developer.

4. Router Backwards Compatibility – The new Angular 8 now features backward compatibility to the router for improving the path to larger applications. It will then entail less hassle to migrate to Angular. This means that the upgrade of Angular 1.x apps to Angular 2+ will take no time.

6. Opt-in Usage Sharing – Another feature aligning with the needs of development is collecting used commands and speed of the build. Opt-in usage sharing gives developers the opportunity to make improvements in their project endeavours in future.

7. Web worker – Web workers are great for speeding up tasks when you start working on CPU-intensive tasks. They let you offload work to a background thread, which can be an image or video manipulation.

When the production bundles are created, essential for increased parallelizability and high performance,  then web workers are included. Angular 8 offers its building support to CLI that has one bundle for each web worker.

There are more like Angular Forms – MarkAllAsTouched, Location, Service worker – Registration strategy, ngupgrade and much more for developers.

Angular and its developments in years certainly have made a remarkable impact on application development. The leading-edge organizations such as ours are always on the lookout of new features to improve the quality of product-offering. Development with the latest Angular8.0 version is more fun and less hassle.

With a rock-solid foundation of expert professionals, we guarantee application development to be not only swift but promise a high quality and exemplary product. We are keen to give our clients the benefits of extending the component used to modern technology.

To know more about this and the other services we have expertise in, Say Hello Angular8 to us!