Wildnet Is your cloud application secure? 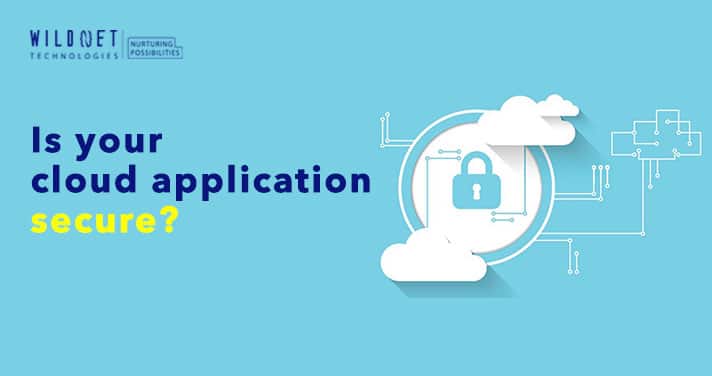 Is your cloud application secure?

The automation testing and checks are critical to any consistent deployment of secure, cloud-based applications.

When Dropbox was breached

Dropbox reported a massive security breach which was discovered to the world later after four years of its major impact. Attackers had encroached into the private details of no less than 68 Million users and hacked into their credentials as well. That was nearly 5 GB data! To avoid any further implications, Dropbox had to request its users to change their passwords.

Even LinkedIn had to deal with breach implications

The similar breach was witnessed the same year when Business and employment service LinkedIn had to face the brunt of cyber-attack compromising the credentials of more than 6 million users only to be made available on Russian Forum.

The attack didn’t just stop there. In 2016, cyber attackers gained access to the email and passwords of 167 million users with the intent of selling on the dark web. To eradicate the loophole, LinkedIn had offered an optional two-way authentication for its users.

Cloud security breaches, like or unlike the aforementioned cases, have been seen in Microsoft, National Electoral Institute of Mexico, Home Depot, iCloud, and Yahoo.

It is thus quite evident that cloud applications should have an extra or much-advanced layer of security added to avoid such attacks in the future.

Ongoing changes have had a mammoth impact on cloud security

For better or worse, ensuring the security of Cloud had led leading tech giant experts to strategize and bake in much-needed security measures.

But, what really are the factors that make a system so strong face vulnerabilities such as weak authentication, SQL injection, weak session management, cross-site scripting, cross-site request forgery, and others?

Challenges we need to address to secure our cloud application

Yes, cloud applications have re-defined innovation and the extent of human intelligence in technological endeavours. Undoubtedly, it is intrinsic to organizations given the following benefits –

However, if expert professionals are able to address the following CHALLENGES then no other technology has the potential to offer “higher security” –

1. Vulnerabilities – It is often the case that attackers always attempt to attack the cloud application with an intent to either deform or gain unauthorized access to critical data stored in it.

Web Application Firewalls, for instance, are able to deal with common vulnerabilities.

2. Monitoring – Measures to protect cloud has left a number of experts in doubt about the extent of security they can provide. But, they are pivotal and must always be included.

3. DDoS attacks – DDoS stands for Distributed Denial of Service. This attack targets critical systems to disrupt network service or connectivity and is often the result of multiple compromised systems (for example, a botnet) flooding the targeted system with traffic. They can cause considerable loss to the infrastructure provider and the application owner. To fight them, you need a full-proof plan for your app, a Strong Network Architecture as well as Reliable DDoS Prevention and Mitigation solutions. You need an integrated Cloud security strategy that protects at all infrastructure levels.

4. Ransomware – Even the Malware! These are popular attacks that must be spotted prior to application deployment.

5. Bots –Useless bots (you may call them) can take as much as important 30% of resources of a server which indeed costs a considerable productivity percentage.

Signature databases including the IP reputation services can help in curb bad bots and malware attacks.

Complex deployment architecture can be obtained only by the inclusion of application delivery tools only with visibility and security features. It is thus feasible to devise a strategy that alleviates almost all security concerns of a cloud application.

This strategy entails traffic management, security after the application traffic, and its analytics in one system. Furthermore, managing the system layers is another integral part of the strategy.

This is why two tech heavyweights, Amazon and Microsoft have their own credential tool to eliminate any possibilities of illegitimate access and offering protection from intruders.

The company has been known to offer a wide range of cloud application services and has deep expertise in offering its world-class web application development in cloud technology.

With its impressive time to market for any software project undertaken, the organization always stands by its commitment to delivering the product useful and following the highest security standards.

Wanting to know more about our CLOUD based accomplishments? Let’s talk.