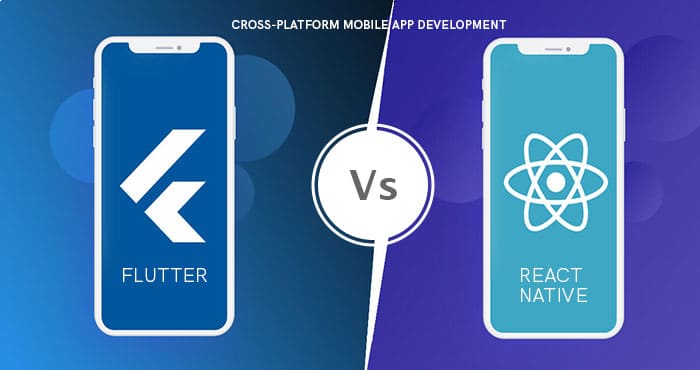 Identify which Cross-platform framework out of React Native and Flutter, is ideal for your mobile app development

Flutter and React Native Frameworks for cross-platform mobile application development are shaking up the technology scene tremendously. Both of these frameworks have considerable similarities. However, differences between the two whatsoever make companies select one for their dream application project.

Before diving into which one of the two is better, here is how they have embarked on the journey to take application development a step ahead.

Flutter by Google – Launched at MWC

Mobile World Congress or MWC conducted in Barcelona in December’18 had seen a fair few technological advancements in the mobile sector.

This annual event known for its largest gathering had celebrated some major developments prominent among which was the launch of Google’s Flutter. The launch was terrific and so was the response of the community!

It entailed discussion of Flutter’s potential in cross-platform mobile applications, current projects and how exciting was the community’s response to the entire launch.

Of course, the platform basically allows the hassle-free building of aesthetic and fast running mobile applications. These are the applications that are built on a stable, high-performance, and high-quality framework.

What makes Flutter better than any other platform is its capability to blend well with your choice of editor including the open source runtime aimed at enhancing the productivity factor.

And Flutter is gaining momentum, thanks to its list of diverse capabilities and version updates! It has earned quite an impressive number of clients from across the globe – Alibaba, Hamilton Musical, Abbey Road Studios, etc.

And the results are quite impressive!

Since it was rendered open-sourced back in 2015, it had brought along many benefits and they are apparent in cross-platform mobile applications, most used globally.

Next up is UberEATS – An app that helps foodies find their favourite food from the nearest local restaurants with a single tap. Post its initial launch in 2015 and later revamped for nearly 50 countries across the globe, React Native was a silver bullet for addressing challenges UberEATS had faced.

React Native captures a small portion of the platform’s ecosystem, but the upshots have been promising in accomplishing the desired objectives.

The most notable of these transformations is the revamped “Restaurant Dashboard”. Every restaurant operating through UberEats currently uses this standard Dashboard. Furthermore, the advancements through UberEats bolster the possibilities of expansion and scale the business.

Did you know the mobile app that comes along with Oculus Go VR has been entirely built on REACT NATIVE?

Which one is better?

Before concluding which one is apt for cross-platform mobile application development, it is imperative to understand the similarities between the two frameworks.

Flutter has just arrived in the market whereas RN has been in the game for quite some time. However, the two platforms despite their age have gathered an impressive number of customers.

The reason why Flutter and React Native stay ahead of other cross-platform frameworks is due to Dart frame. Also, the JavaScript layer helps them to connect with native components easily.

1.) Performance – When it comes to speed of loading and execution and that of the Behaviour code, Flutter wins. React Native features smaller size of executable. However, the code breaks in RN due to Android and iOS UI changes.

2.) Framework Development – Flutter is known for its 160 widgets and components which are only 40 in RN. However, due to its declarative component creation syntax, UI creation becomes more fun and easy. Also React Native, unlike Flutter, allows style separation from elements. Moreover, 3rd party libraries in RN are available comparatively easily.

3.) Developers Availability & Code – React Native has quite a large number of developers working on the framework as the code is less complex in contrast to Flutter’s Dart. Moreover, RN offers dynamic code flexibility. But when it is about safety we’re talking, Flutter is safer.

4.) Cross-platform Development –Given the factor that all components having an ability to work on cross-platform, Flutter should be the choice.

5.) Toolchain Development –React Native features a highly complex toolchain that is difficult to manage and update in contrast to Google’s Flutter framework.

You’ve come to the right place

At Wildnet, Flutter and React Native are trending, given the untapped potential of the former and massive popularity of the latter. Our expert developers leave no stone unturned in making an aesthetic and user-oriented cross-platform mobile applications, capable of delivering the highest quality experience.

In a couple of years, we have earned an impressive React Native clientele and on the path to earning more in Flutter. It has been all possible with incessant efforts in learning and implementation of technologies for the good of tech community.

Do you have any application in mind? Write to us and we will give you the best framework to make it happen.