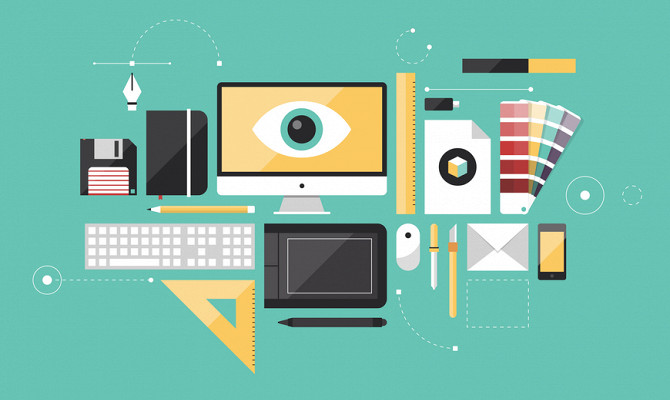 What is Flat Design?
Flat Design is a minimalistic design approach that emphasis usability. It features clean, open space, crisp edges, bright colors and two dimensional illustrations. As the name suggests , flat design is defined by the flatness of style. It implicates simplifying of an interface by removing extra elements such as shadows, bevels, textures and gradients that create a 3D look.
The basic idea is to create a finished design that lives in only two dimensions, without losing any of the functionality that a “ regular” interface provides. This creates a new challenge for the designer, because by stripping an interface of its decorations and effects, it becomes harder to define the main actions and elements in a design.
Evolution of Flat Design
The term “ Flat Design” was coined and popularized by Allan Grinshtein. The basic idea is that a minimalistic interface can be better suited to its function when compared to a more embellished, complex one. This is how Flat Design came into existence and is preferred over other styles. Most of the flat design schemes have five characteristics – no added effects, simple design and UI elements, focus on topography and focus on color and an overall minimalist approach.

How to create a Flat Design?
Buttons:
When creating a button, using a border, gradient and drop-shadow will make the element stand out against the background and content. This makes it easily identifiable as a clickable element.The prime focus while creating a button must be on grid organization and color contrast.
Forms:
Forms are a crucial element to get right in a flat design. The text areas, inputs and dropdowns shouldn’t use inset shadows as they usually do by default. The user may change the design of the forms by using CSS.
Where should flat design be used?
Flat Design should be used moderately. It isn’t right for every website. For example flat can be great if one is designing a portfolio or web tech start up site but it cannot be used for creating something more complex. The target audience should always be kept in mind while designing a website. The design should convey the hidden message behind the website.
Usability Problems with Flat Designs:
There are many issues that have evolved in using the Flat Designs. The primary objection to flat design is that it  tends to sacrifice user’s needs. For years, users had been exposed to traditional signifiers of clickability, such as blue, underlined links and 3D effects on buttons. As design trends shift and users are exposed to new patterns, the average user’s ability to intuitively identify linked elements has evolved. But just because users are better at detecting linked elements doesn’t mean they don’t need any clues at all. In fact, it has been noticed that a long-term exposure to these flat yet clickable elements has been slowly reducing user efficiency by complicating their understanding of what’s clickable and what isn’t.